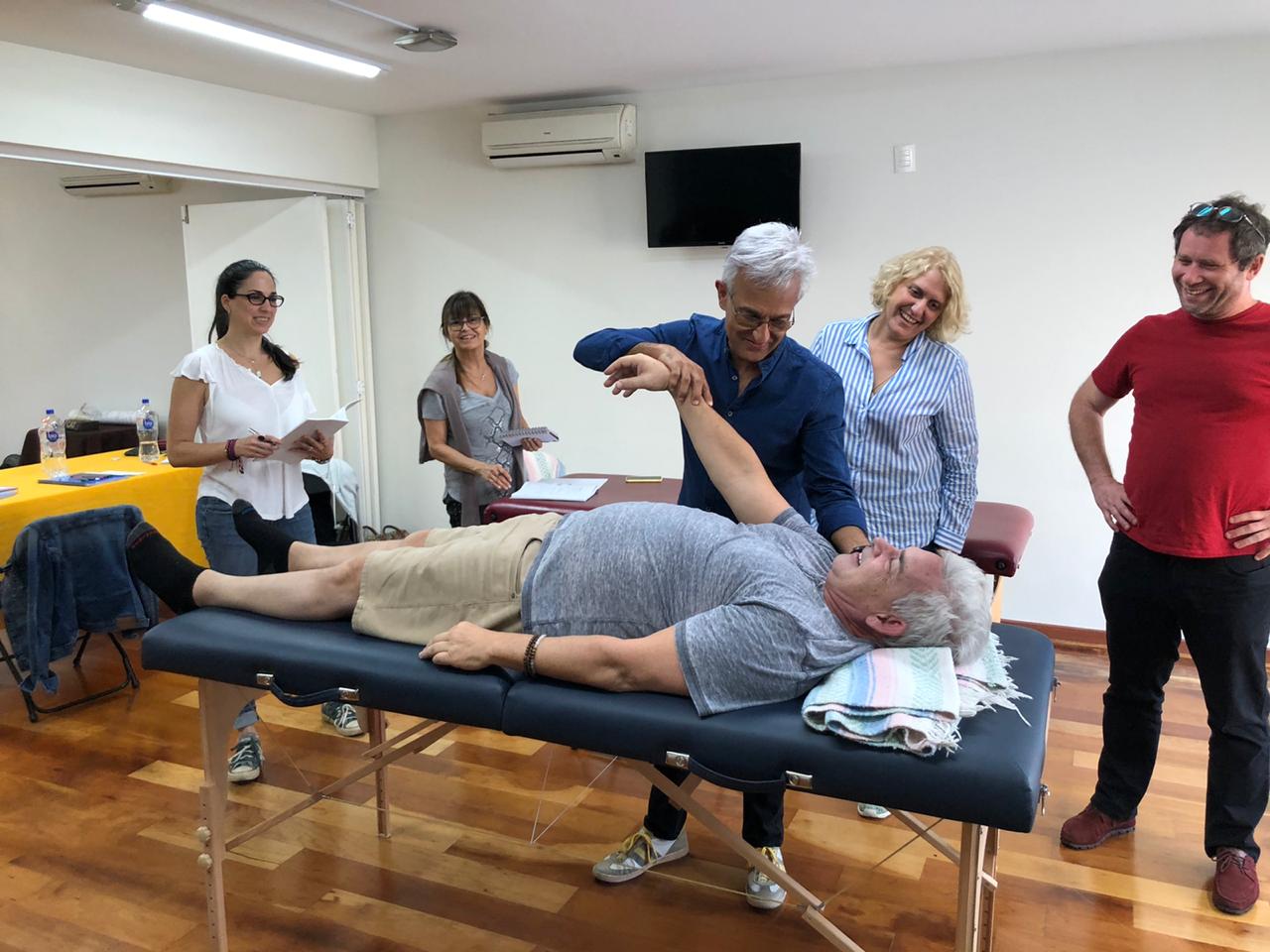 Practicing Neural Organization Technique since 1993 has been one of the most rewarding experiences of my life. It is what I came to this earth to do, I am convinced of that.

It is an organized and sequential system which makes it easy to learn and perform, if one takes time to study and memorize the material. It gives the doctor much more control over how and why they are treating the body for you are interactively working with the body’s intelligence, rather than just focusing on symptomatology.

Over my years, many doctors and students who have observed me working have immediately stated that they would like to learn and practice N.O.T.  There is a certain level of background education and hands on experience needed, as well as a level of determination, commitment, and study to really master this incredible body of knowledge. If you are interested in learning N.O.T., please give this consideration. I much prefer to teach 10 committed people who wish to complete certification, rather than have 50 people start learning with some dropping off as time passes.

The rewards and satisfaction received and given to your patients from witnessing repeatable and quick improvement, is more than worth the effort invested.

Please watch the short video and review the prerequisites and certification requirements. If you are seriously interested in learning N.O.T.  or arranging a seminar in your area, please feel free to contact me.

To attain the Diploma of Proficiency in Neural Organization Technique a student must:

Doctor Of Chiropractic and Acupuncture

I am an instructor of Brain Gym and Touch for Health in México for over 6 years now. I arranged for Dr. Tangri to come to Mexico in 2018 to teach and intensive N.O.T. course.

As an N.O.T. student in 2018, I learned so much from Dr. Tangri. With all his background as a Chiropractor, he explained thoroughly the basis of N.O.T. and it gave me the security to use it as my ONLY therapy with my patients. The course was such a sucess that Dr. Tangri came back in Autum of 2019 and gave another intensive. I am so grateful to have learned this treatment.

Brain Gym and Touch for Health

Neural Organization Technique is one of the most powerful and complete assessment and adaptation protocols on the face of the earth today. It is the only health care system that takes into consideration all of the various circumstances under which we live. These circumstances influence the way the body responds to stress of any kind and how these stresses register in the Central Nervous System.

The body is a self-healing, self-regulating, self-perpetuating, integrated and organized organism. The principles of N.O.T. are based on the primal survival systems of the species which, by their very nature, are inborn or innate, integrated and fully automatic from the beginning of life.

It is the philosophy and guiding principle of N.O.T that the body is an integrated whole, dependent on the functional integrity of all the survival systems. In short . . . The logic of the living body is being unfolded.

Dr.Carl Ferreri grew up in Lawrence, New York.   He built his own house by hand, including much of the furniture in it.  His ability to take on  the role of single father to raise his family, study, work, research, and develop N.O.T. showed the quality of the man.  If he set his mind to it, it happened.  Dr. Ferreri lived all his life in New York and after studying as a Chiropractor, built his Chiropractic clinic in Brooklyn.  He studied over 200 advanced seminars, separate from his Chiropractic studies, from which he drew the background and information for N.O.T.  He was often controversial among his peers but he gained their respect for his dedication and persistence.  He was a living legend in the last 50 years.  His dedication to relieving the suffering of humanity was his trademark. During his professional career he taught hundreds of practitioners around the world who in turn influenced thousands in a positive way.
Carl Ferreri will be remembered as a very special person by those whose lives he touched.  His work will be a tribute to him forever.  Jennifer Kusmenko

as taken from the book by Dr. Carl A. Ferreri

For many years many people and particularly the N.O.T. practitioners have asked how I discovered the various protocols which make up what is now known as Neural Organization Technique. They wanted to know my thought processes, how I developed the logic of the treatment programs and how I discovered the logic of the body itself. I will try to give you at least some of the thought processes more or less how they happened.

For as long as I can remember I was always interested in the human body and how it functioned. There was very little spoken of back then in relation to healthy living with the exception of exercise and eating the “right” foods. Dietary implications and knowledge were just starting to come into vogue with people like Carlton Fredericks and a few others who for the most part were ridiculed as being some kind of charlatans…

I had started out following in my father’s footsteps by attending law school. However, due to developments relative to my own health, allergies of skin and sinus affectations and my subsequent relief from these by virtue of chiropractic intervention, I did not finish the final exams in law, but changed direction and studied and became a chiropractor instead.

Although I was reasonably successful with most of the patients, I was somewhat dissatisfied with chiropractic per se for a number of reasons. One was blind faith required that the “subluxation” was the primary consideration in health and disease. I thought about all the other people in the world who did not go to a chiropractor. Didn’t they have subluxations? How were they healthy? I was also concerned that the lack of results in certain cases many times did not coincide with the philosophy of Chiropractic as I thought it should. Everything was somewhat haphazard. There was no organization to the approach to the patient with nothing really happening on purpose. In fact, technically you were not allowed to say that you treated this patient for any condition because that was considered the practice of medicine. Technically I could only say that I removed the subluxation and the healing powers of the body healed the problem or relieved the pain. This was essentially true, however, but this bothered me to some extent. I wanted to treat the patient and get a specific result on purpose. and not by accident. I could not reproduce the results I wanted every time even if the same patient came in with the same condition months later. It became obvious that I needed to know more than what was taught in school.

I started looking for other answers first in another Chiropractic technique not taught in Chiropractic Colleges known as Sacro-Occipital Technique and Cranial Technique. This study proved to be fascinating adventure and gave me specific reproducible outcomes more often than anything else I knew. As I became conversant with this technique, I was pleased to find out that these techniques had very specific neurological rules with demonstrable changes in body mechanics and structural positioning. Unfortunately for reasons I could never understand, both of these techniques (the S.O.T. and Cranial) were, and still are, almost totally ignored by the Chiropractic profession and only allowed as off campus studies as is Kinesiology today. Oddly enough a very similar Osteopathic technique known as Sacro-Cranial Technique which has similar concepts and applications but is very much limited in its scope and application as compared to S.O.T. has been embraced by most of the alternative Medical practitioners, Health and Nurse Practitioners, Kinesiologists and Chiropractors.

With the advent of Kinesiology, I knew immediately that this was probably the most important advance of knowledge in the world of healing. Unfortunately, the Chiropractic world again chose to ignore these fantastic advances to the understanding of human condition. Dr. George Goodheart and other chiropractors formed an organization to promulgate and expand this new knowledge of kinesiology and kinesiological modalities. I became a member of this organization which is known as the International College of Applied Kinesiology and over a ten-year period I attended approximately 2500 hours of instruction, discussion, presentations, research and hands on practice to refine my knowledge, techniques and concepts and many personal observations which were published in my seminar notes. I presented a number of research papers to the organization which were published in the Collected Papers of the ICAK over the years.

One of the more simplified forms of Kinesiology which combines the muscle testing phenomenon, acupuncture knowledge and concepts, the use of the meridian energy system (from Acupuncture), the neuro lymphatic reflex and the neuro vascular reflex systems, reactive muscle systems, ligament interlink and other procedural and organizational concepts known as Touch For Health founded by Dr. John Thie. Dr Thie became a very important part of the creation of Neural Organization Technique. Touch for Health gave me my first organizational concepts to address the human condition. I was attending a Parker Chiropractic Seminar in Dallas, Texas in which John was lecturing on some part of TFH. I don’t remember what he said or what was being discussed but it was if a light bulb went off in my head. I said “thank you John”. He later asked me what he said and I told him I really can’t say specifically, but that the combination gave me the primary organizational concepts I was looking for.

Combining the knowledge from Chiropractic, Sacral Occipital Technique, Cranial Technique, Applied Kinesiology, Touch For Health and the ancient knowledge and wisdom of both Acupuncture and Ayervedic body mind concepts, the first programs for the organization of the central nervous system were first conceived. As these concepts and procedures developed into a system of treatment it became evident to me that this was a very powerful protocol even in its early stages of development. I decided that others needed to know what I had discovered. And so N.O.T was born to grow and develop!